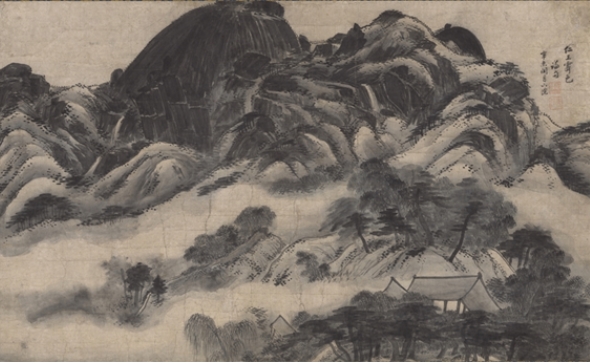 Meanwhile, MMCA’s special exhibition “Masterpieces of Korean Art” presents 58 paintings produced mainly from the 1920s to 70s by 34 Korean artists, among a total of 1,488 donated pieces, until March 13, 2022.

“This is a historic day as the museum hosts the first exhibition showcasing some of the best of the best works from Lee’s collection that will help enrich Korea’s modern and contemporary art history,” MMCA director Youn Bum-mo stated at a press conference.

“The country’s 20th century has been marked by Japanese colonization, civil war, division, famine, as well as the rapid transformation from an agricultural society to a high-tech industrial one. We witness here how the artists against such a backdrop viewed this changing world and reflected it in their unique oeuvre.”

The most prominent part of the exhibition is the section dedicated to five of the most iconic artists, serving as the backbone of Korea’s modern art: Lee Jung-seop, Kim Whan-ki, Yoo Young-kuk, Chang Uc-chin and Park Soo-keun.

Kim’s large-scale wall painting “Women and Jars” immediately grabs the eyes of the viewers. It features East Asian motifs favored by the artist in the late 1940s and 50s: “moon jars,” or round porcelain jars that resemble the shape of the full moon, cranes and deer. After he moved to New York in 1963, he made a dramatic stylistic transition into abstract dot paintings, as can be seen in “Echo 19-II-73#307.”