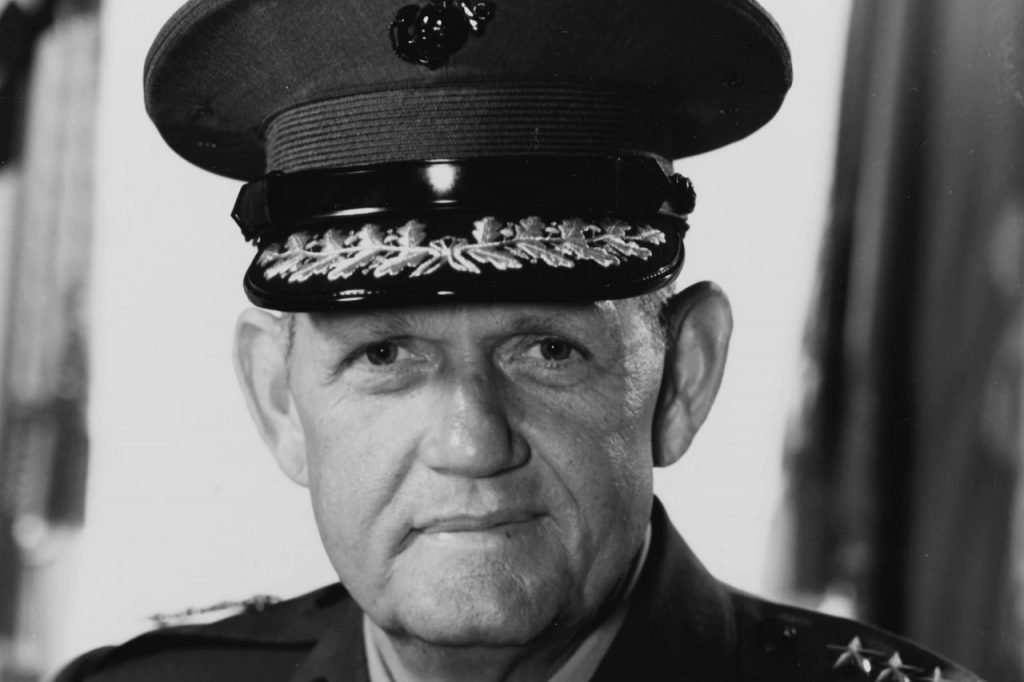 Gen. Louis H. Wilson Jr. retired as the commandant of the Marine Corps in the late 1970s, but he made a name for himself long before that. During World War II, his heroics were vital to the U.S. recapture of Guam. His efforts earned him the Medal of Honor.

Wilson was born on Feb. 11, 1920, in Brandon, Mississippi, to parents Louis and Bertha Wilson. He had an older sister named Elizabeth. According to the Boston Globe, Wilson’s father was a farmer who died when he was 5. So, as a young man, he sold vegetables from a cart to help his family earn money.

Wilson studied economics at Millsap College in Jackson, Mississippi, where he also played football and was on the track team. When he graduated in May 1941, a recruiter talked him into enlisting in the Marine Corps Reserve. He was commissioned as a second lieutenant that November, just weeks before the attack on Pearl Harbor launched the U.S. into World War II.

Wilson was stationed in San Diego with the 2nd Battalion, 9th Marines, 3rd Marine Division, until February 1943, when his unit was sent to the Pacific front. He was quickly promoted to captain and served at Guadalcanal, Efate and Bougainville, but his rise to prominence began during the battle to recapture Guam.

He was in command of Company F on July 25, 1944, when his unit was ordered to take a portion of Fonte Ridge back from Japanese forces. That afternoon, despite heavy machine gun and rifle fire, they pushed up 300 yards of rugged hillside. At that point, Wilson took command of other disorganized units, a reinforcing platoon and motorized equipment that were already there as they prepared to defend the position for the night.

Over the next five hours, Wilson was wounded three times while leading attacks against the enemy above them. At one point, he stopped fighting to go to the company command post for medical attention. But when the enemy launched a counterattack soon thereafter, he volunteered to rejoin his units in the fight.

The counterattacks came in waves all night. In that time, Wilson repeatedly ran into the hail of grenades and gunfire, fighting the enemy in hand-to-hand combat to keep them from pushing his units back. One time, he sprinted 50 yards through open territory to rescue a wounded Marine who was lying just beyond the front lines.

After 10 hours of fighting, Wilson’s units had finally managed to fend off the Japanese attacks. He then organized a 17-man patrol to head further up the ridge to seize vital ground. Intense enemy fire slowed them and struck down 13 members of the patrol, but the remaining men drove forward and were able to successfully capture and secure the high ground of the ridge.

Wilson’s daring tactics and leadership were crucial to the regimental mission’s success. His units were credited with eliminating about 350 Japanese troops.

After the battle, Wilson went to the U.S. Naval Hospital in San Diego to recover from his injuries. He was released in October 1944 and, soon after, married his longtime sweetheart, Jane Clark. They had a daughter named Janet.

Wilson received the Medal of Honor for his actions in Guam on Oct. 5, 1945, when President Harry S. Truman placed the medal around his neck during a White House ceremony. Ten other Marines and three sailors also received the medal that day.

In January 1946, Wilson’s alma mater held a “Louis Wilson Day” in his honor. During a dinner held for him, Wilson said, “The real heroes of the war are not able to receive the medals; they lie buried on the beaches of Tarawa and Salerno, of Guam and Normandy.”

By July 1975, Wilson had reached the rank of general and was named the 26th commandant of the Marine Corps. During his tenure, he stressed modernization of the post-Vietnam Corps. According to the Marine Corps University, he “insisted on force readiness, responsiveness and mobility by maintaining fast-moving, hard-hitting expeditionary units, each consisting of a single integrated system of modern ground and air-delivered firepower, tactical mobility and electronic countermeasures.”

Wilson retired from the Marine Corps in June 1979 after 38 years of service. He and his wife moved to a suburb of Birmingham, Alabama, where their daughter lived.

Wilson died on June 21, 2005, after suffering from a degenerative disorder of the nervous system. He was 85. The general was buried at Arlington National Cemetery with full military honors.

Over the years, a gate and a boulevard were named for Wilson at Camp Lejeune, North Carolina. The headquarters building for Marine Corps Officer Candidates School in Quantico, Virginia, also bears his name. Lastly, the USS Louis H. Wilson Jr., a new guided missile destroyer, was named for Wilson in 2016. It’s currently still being built.

This article is part of a weekly series called “Medal of Honor Monday,” in which we highlight one of the more than 3,500 Medal of Honor recipients who have earned the U.S. military’s highest medal for valor.