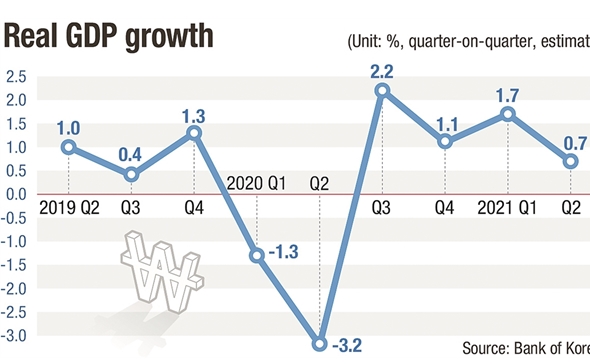 Exports registering a worrisome 2 percent quarter-on-quarter contraction in the April-June period is mostly due to the base effect from a strong performance three months earlier.

This is why the central bank considers the fears of a third-quarter contraction and concerns over a deeper-than-feared recession in the months to come to be overblown. Also anchoring the view is growth figures thus far having overshot the country’s potential growth of 2.5 percent. Potential GDP is an estimate of the output that would have been produced by the economy with labor and capital at their maximum sustainable rates, without triggering inflation.

“The second-quarter figures might seem concerning, especially since exports logged 41.2 percent, 45.6 percent and 39.7 percent increases in April, May and June, year-on-year respective. Factoring in the base effect, the figures do not pose that much of a problem,” said Park Yang-su, head of the bank’s economic statistics department.

triple salvation and agenda for peace