Wenny Angelina Hudojo’s older child Evan would have turned 15 this year, celebrating his birthday with mum, dad and younger brother Nathan at their home in Surabaya, Indonesia .

But the occasion on August 29 was marked with prayers and flowers set on his grave, three years after Evan and Nathan’s lives were cut short in an Islamic State-linked church bombing .

“Happy birthday in heaven to my angel Evan. Always be happy with Nathan in heaven,” Wenny wrote in an emotional message on Instagram.

She uses her account to share precious memories and photographs of her smiling, happy boys, but in so doing, she is also reliving her anguish.

Wenny told This Week in Asia she could not hide the fact that she was still “100 per cent sad”.

“How can a mother not feel sad over the loss of her children? I can never hold or hug them again,” she said.

On the morning of May 13, 2018, Wenny had gone to Santa Maria Catholic Church with Vincentius Evan Hudojo, 11, and Nathanael Ethan Hudojo, eight.

As they were approaching the building, a pair of teenagers riding on a motorcycle detonated home-made bombs in the first of a series of blasts in Surabaya.

A loud explosion rocked the place. Wenny instinctively reached out for her children. She found them bloodied and lying on the ground. She was herself seriously injured.

The boys later died in hospital.

“I only had two children and they were taken from me in the blink of an eye. They were snatched from me in front of my own eyes,” she said.

But Wenny said she forgave the perpetrators three days after the event. It helped to lessen her burden, she said, and she hoped her decision would open the path for her boys “to enter heaven”.

“My sons will not want me to be sad, so I have to be strong,” Wenny said. “I love them very much and for sure they loved their mother.”

She also felt sorry for the young suicide attackers and viewed them as victims of their father’s ideology.

“The two perpetrators are also victims. I feel very sorry for them. They should not have been turned into victims,” Wenny said. “Their parents were most responsible for what happened to them.” 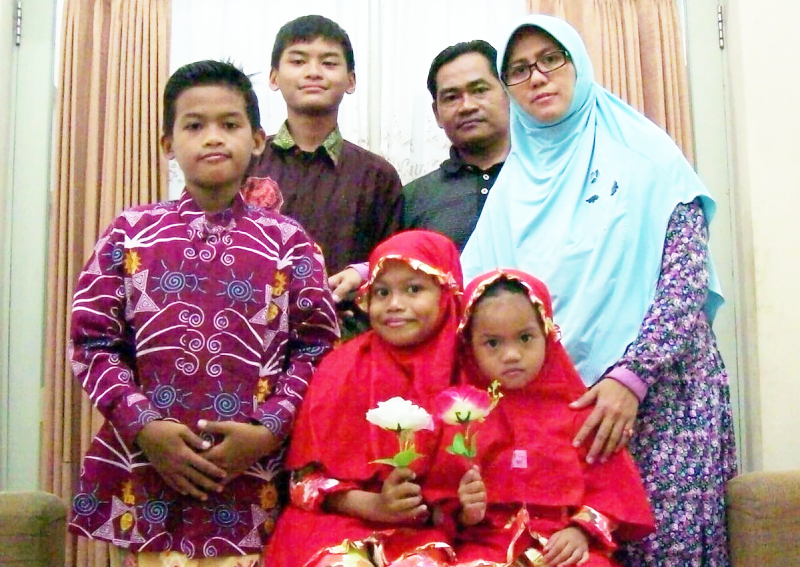 Yusuf Fadhil, 18, was just like any teenager. He loved playing online games, and futsal at school.

Fariz and Yusuf were very close. They were born on the same day – November 25, 2000 – and attended the same primary and middle school.

But unbeknown to Fariz, behind his good friend’s happy demeanour was a terrible secret – he was being groomed by his father, Dita Oepriarto, to become a suicide bomber.

He made his four children, Yusuf, Firman Halim, 16, Fadhila Sari, 12, and Famela Rizqita, nine, watch footage of suicide blasts, including the 2015 Paris terror attacks, according to Indonesian police.

In the May 13 attack, Yusuf and Firman travelled to the church on a motorcycle, then set off explosives that killed themselves and five others, including Wenny’s children Evan and Ethan.

Minutes later, their mother and two younger sisters blew themselves up at another church. Their father was the last to die. He drove his bomb-packed car into a third church that exploded in a huge fireball, killing himself and seven others.

In less than 90 minutes, Dita’s entire family was dead.

“I am very sure Yusuf didn’t want to do it,” Fariz said. “If he had a choice, he would never have done it. But he was a very obedient son and he would never go against the wishes of his father.”

Fariz added: “Yusuf also hated Isis. He once said that Isis was wrong and did not represent Islam.”

After Yusuf’s death, his friends discovered he had left behind an Instagram account full of solemn pictures and captions that, in retrospect, suggested he was going through inner turmoil.

In one post of a neighbourhood pictured at dusk, Yusuf wrote “I can’t leave”, while a picture of a forlorn-looking baby hippopotamus was accompanied with the caption, “I’ve got nothing”.

Yusuf wasn’t the only one who did not want to die. His brother Firman was seen sobbing at a mosque shortly before the bombings, a security guard in their neighbourhood told this reporter back in 2018.

The Surabaya bombings shocked Indonesia and marked the start of suicide attacks involving families, including in southern Philippines and Sri Lanka.

“It was clearly the first tactic of its kind employed by terrorists in Indonesia or even globally. It’s a unique legacy of terror methods introduced by pro-Isis supporters,” said Noor Huda Ismail, visiting fellow at the S. Rajaratnam Institute School of International Studies (RSIS) in Singapore.

Radical parents tended to groom their children to follow their path, believing the family would be “reunited in heaven” when they died as martyrs, Huda said.

“It’s a bizarre, apocalyptic world view. It’s like a cult,” he said.

Huda said it could not be ruled out that this method would again be employed by terrorists.

Siti Darojatul Aliah, executive director of the Society Against Radicalism and Violent Extremism (Serve) in Indonesia, said however that the current trend appeared to be couples carrying out attacks.

“But at the moment, militants are lying low as counterterrorism police are carrying out raids and making lots of arrests,” Siti said.

In March this year, a newly married Indonesian couple, believed to be members of JAD, blew themselves up outside a church in Makassar, South Sulawesi. The woman was said to be pregnant.

In January 2019, Indonesian couple Rullie Rian Zeke and Ulfah Handayani Saleh travelled to southern Philippines, where they carried out twin suicide bombings at the Our Lady of Mount Carmel Cathedral on Jolo island.

According to Rommel Banlaoi, chairman of the Philippine Institute for Peace, Violence and Terrorism Research, there have been five suicide attacks involving family members since 2017.

Relatives are intentionally recruited for tactical, logistical and security purposes, he said.

“Involving family members in suicide missions can lower the risks of discovery as they protect each other from information leakages,” Banlaoi said. “Family members also facilitate recruitment, training and actual operations. Family members also benefit from the financing of terrorism.”

Rizka Nurul, of the Institute for International Peace Building in Indonesia, said radicalised parents preferred to take their families with them into the afterlife as they did not want to risk their children being led away from their beliefs by the “wrong parties”.

She said it was important for anti-terrorism efforts to involve both the online and offline spheres.

“If the online and real world support a narrative that is different [from the beliefs of extremist parents], it is possible the child will not become radicalised,” Nurul said, adding there was a need for digital literacy on the issue of radicalism.

Daily roundup: Fees for passport, identity card collection at SingPost outlets to be waived for all Singaporeans starting Oct 1 — and other …