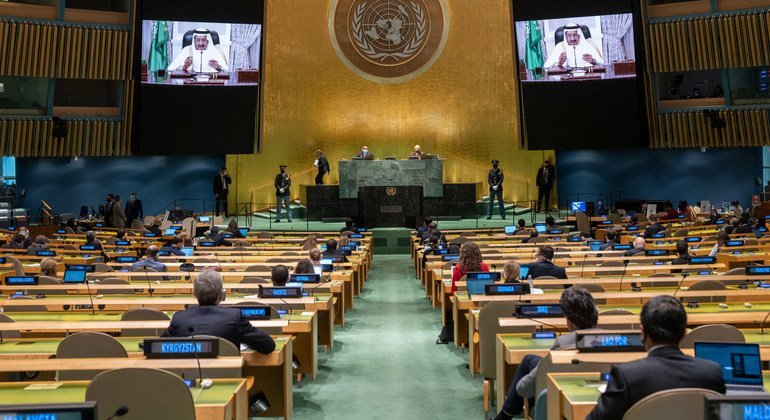 “The foreign policy of the Kingdom gives utter priority to entrenching peace, security and stability and to supporting dialogue and peaceful solutions,” King Salman said in a pre-recorded message.

He said Saudi Arabia also wants “to set up conditions conducive for development and ones that achieve the aspirations of peoples for a better future in the Middle East.”

King Salman was one of the speakers on the second day of the high-level week of the General Assembly. After being held virtually last year due the coronavirus pandemic, this year’s gathering will feature “hybrid” activities that will include leaders in person along with virtual participants.

The King promised that Saudi Arabia will remain a top international donor, despite the country’s economic troubles. He said that $800 million in donations were already helping poor nations fight COVID-19.

“Despite our economic difficulties, the Kingdom of Saudi Arabia continues to be committed to its developmental and humanitarian role in assisting the most needy states and the most affected states to confront national natural catastrophes and humanitarian crises,” he said.

According to him, Saudi Arabia ranks as the Arab world’s top donor and that it is third globally.

The Head of State assured that, from Iraq to Syria and Libya, his country will work towards peaceful solutions to problems. He also highlighted the situation in Iran, adding that he supports efforts to prevent the country from obtaining nuclear weapons.

“The Kingdom insists on the importance of keeping the Middle East free of weapons of mass destruction. On this basis, we support international efforts aiming at preventing Iran from having nuclear weapons,” he said.

As world leaders prepare to resume talks with Tehran to reinstate a 2015 nuclear pact, King Salman expressed the hope that the “initial talks will lead to concrete results to build confidence.”

He also addressed the threat of extremism in the region, stressing that Saudi Arabia “continues to fight extremist thinking built on hatred, and keeping in check terrorist organizations and sectarian militias that destroy humanity and nations.”

Turning to the conflict in Yemen, he said Houthi rebels keep rejecting the initiatives offered through the United Nations to peacefully resolve the conflict.

“The peace initiative in Yemen, tabled by the Kingdom last March, sought to end the bloodshed and conflict. It ought to put an end to the suffering of the brotherly Yemeni people,” the King argued.

“Unfortunately, the terrorist Houthi militias reject peaceful solutions. They have placed their bets on a military option to take over more territory in Yemen,” he added.