RESIDENTIAL PROPERTY PRICES in the second quarter contracted at its steepest rate since 2016, primarily due to the continued decline in prices of condominium units and single houses amid the prolonged pandemic.

Data released by the Bangko Sentral ng Pilipinas (BSP) on Friday evening showed the Residential Real Estate Price Index (RREPI) declined by an annual 9.4% in the April to June period, worsening from the -4.2% in the first quarter.

This is the biggest annual contraction since the data series started in 2016. 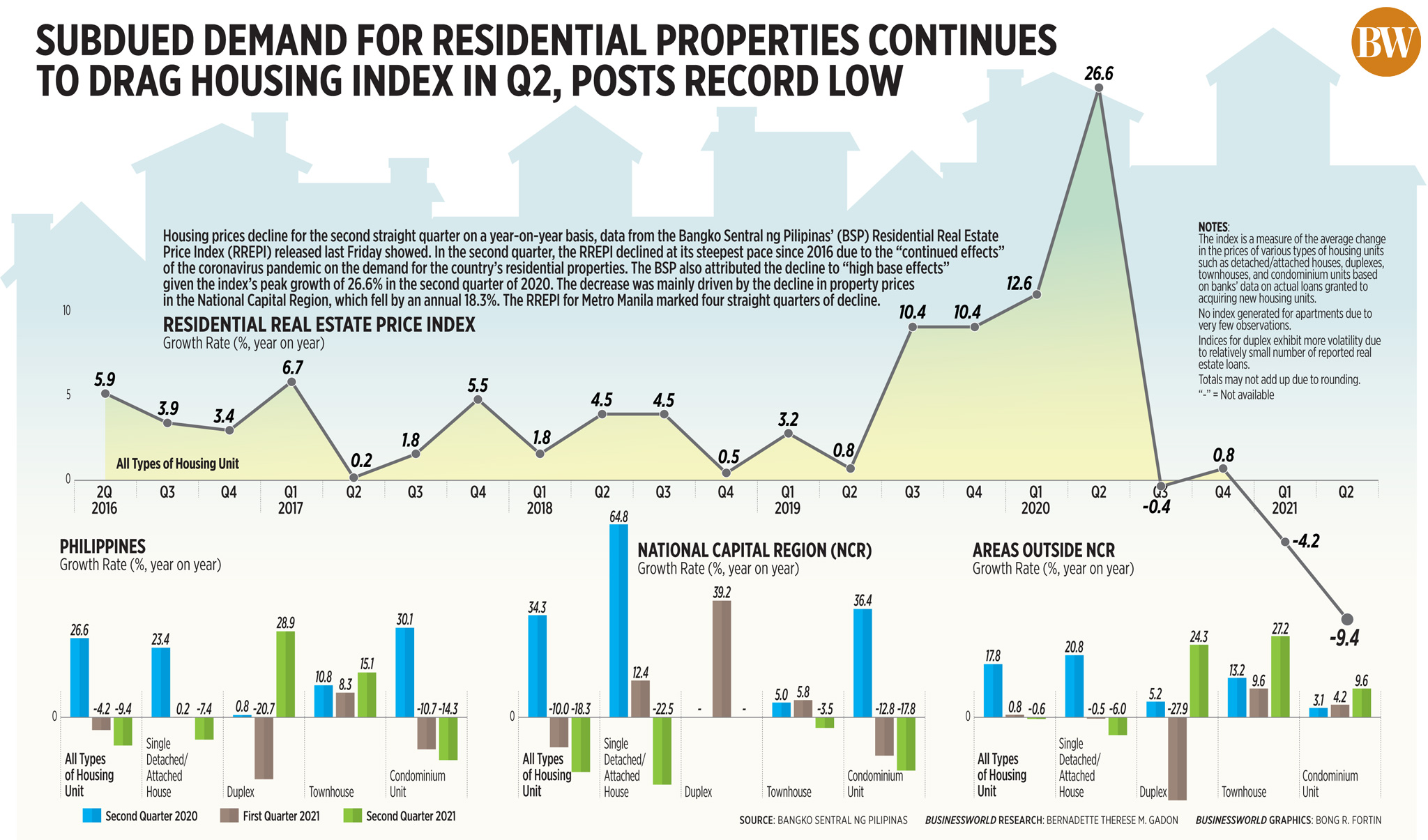 The BSP said the pandemic continued to dampen the demand for residential property.

“High base effects may also have contributed to the drop in prices given the registered peak of the index (26.6%) in the second quarter of 2020,” it added.

The RREPI tracks the average change in prices of residential properties across housing types and locations, which gives the BSP insights into the property market where bank exposure is regulated.

Nationwide, the prices of condominium units declined 14.3% year on year in the second quarter, reversing the 30.1% increase in the same period last year. This is also the steepest contraction since the 15% drop in the third quarter of 2020. It was also the fourth straight quarter of a decline in condominium prices.

He noted that only 10,000 condominium units were taken up in the pre-selling market for the first half, adding the industry is unlikely to equal the 36,000 units brought in 2020.

“We no longer see demand from POGOs (Philippine Offshore Gaming Operators), while local end-users and investors are still on a wait and see,” Mr. Bondoc said in a Viber message.

Chinese nationals employed by POGOs had fueled demand for condominium unit rentals before the pandemic, prompting many unit owners to raise rental fees.

On the other hand, prices of duplexes and townhomes increased by 28.9% and 15.1% year on year in the April to June period, respectively.

Quarter on quarter, home prices went up 3.4% in Metro Manila.

“It is more economical for employees to cut on rental cost and just stay in their permanent residence and reallocate rental spending to telecommunication spending. Given uncertainties in income and jobs, it is difficult to sustain a medium- or long-term rental commitment,” Mr. Rivera said in a Viber message.

In the provinces, residential property prices slipped 0.6% amid the 6% drop in prices of single detached/attached houses. On the other hand, other housing types such as duplexes (24.3%), townhomes (27.2%), and condominium units (9.6%) saw higher prices.

HOUSING LOANS
Data from the central bank showed residential home loans in the second quarter rose 82.3% year on year, but dropped 3.6% compared with the first quarter.

The pandemic and its impact on work arrangements and employment will continue to weigh on the housing market, Mr. Rivera said.

On the other hand, he said the pickup in vaccinations will mean more people will be eventually allowed to return to offices which would lift housing demand in the cities.

“Until we see a more predictable movement in the economy, income, jobs, the housing prices would continue to be constrained,” Mr. Rivera said.

“House-and-lot demand in the provinces will remain stable given sustained OFW remittances that are starting to pick up,” Mr. Bondoc said.