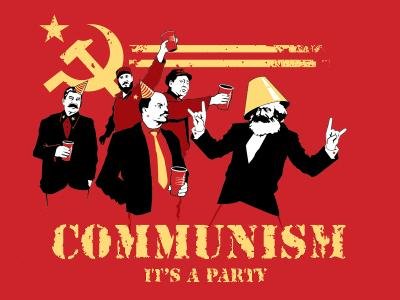 “A drab of state, a cloth-o’-silver slut, to have her train borne up, and her soul trail in the dirt.”  ~ Henry David Thoreau

Free Born Americans must attack the Biden regime’s fascism and state sponsored authoritarianism at every turn in the road and each time he and his handlers move against traditional America; freedom and liberty. We must reject and refuse to comply with any illegal diktat presented to us under the color of “law” that places some intolerable limit on our personal freedoms and liberties, in the name of “for the Greater Good.” Such efforts inevitably limit the freedom of all American society, for no other reason than the Biden regime’s psychopathic need to control everybody and everything and to bring the nation to its knees under authoritarian socialism. Fight back against the Biden regime and a Democratic Party that equates the ideas of Marx and Mao with truth, justice and liberty.

Who are party to “the Greater Good” and who actually benefits? Certainly not the hardworking, freedom-loving individuals of America, in the context of how the phrase is currently understood within American society.

Too many in this country have suggested that America’s greatest achievements would never have materialized without “the collective”, as they have fallen prey to the fallacious conflation of results from individuals cooperating of their own free will and those of forced compliance by the government. Forced compliance and government intrusion have caused every problem ever witnessed in this country. It was the unleashed power of individual creativity found through individual liberty that gave us technological advancements – like the cotton gin, the automobile, and the airplane – that made America’s economy thrive more than anyone could imagine, thus opening the door for greater individual prosperity and liberty.

Proponents of Marx and Mao see humanity as a whole, much like a massive thunderstorm, to be handled as an entire single unit, in unison under Communist and collectivist dogma, while advocates of Adam Smith Capitalism and freedom and liberty look at that same storm of humanity and see in each the uniqueness of each individual, each raindrop. And it is that distinction that results in extreme and vastly different results.

Every important policy decision made today under Biden has virtually no basis in actual prescribed law and very often goes against our U.S. codes. Whether we speak of Biden’s disregard of contract law in association with the Keystone Pipeline, or his disregard for property rights through the Eviction Moratorium, or his disregard for sound economics through his Spending Bills, orhis disregard for science associated with both Covid and climate change, and his complete disregard for U.S. Border and Immigration Law. Biden’s policies are aimed at compelling all Americans to submit to the collective and forego all sense of self, family, God and Country, and the relinquishing of all one’s liberty at the expense of one’s own conscience.

Our system was never intended to be a democratic tyranny, and given all that has occurred since 2008 to the present, the tyranny we now experience is a result of the American people being too tolerant over the years. We accepted manipulations of our rights as enumerated in the Constitution, by way of “democratic” means and by the enemy from within, those communists and anti-Americans, that has always sought the end of our republic, from the first days of the release of Das Kapital. Hundreds of Communist Bureaucrats, such as Obama advisor Valerie Jarret and Biden Director of Domestic Policy Susan Rice, have infiltrated top positions throughout the federal institutions over the decades, along with thousands more at every level of society who are more than willing to use “any means necessary”, any dirty, immoral act, from arson to murder, to ensure a final victory for the Deep State and the end of America’s republic. And all the while the Biden regime uses a weaponized Justice Department  and FBI against all America; even the parents of America who are fighting as hard as they can to stop the fascist indoctrination of their children against their express wishes and will.

Everything Biden’s regime is doing is supposedly for the benefit of all Americans, according to Biden and others alongside him, and in essence “for the Greater Good”.

Please tell me how taking away one’s right to choose their own medical treatment is for the benefit of all Americans. Or, for that matter, playing God and stealing wages through asinine taxes that are supposed to prevent drastic climate change, as if they can. Or flooding the nation with poor, uneducated foreigners bent on taking all they can from American coffers. Or spending us into oblivion and the permanent destruction of the U.S. economy.

Please tell America how “social infrastructure” is anything other than money thrown into the pockets of Biden Cronies, Democratic Party Communist apparatchiks, and useless, do-nothing programs, and how such efforts benefit anyone at all. And please, we all want to know, tell us how preventing actual peaceful protest by targeting parents angry over School Board overreaches concerning school curriculum, masks and covid mandates is actually beneficial to all America and “for the Greater Good”.

“The smallest minority on earth is the individual. Those who deny individual rights cannot claim to be defenders of minorities.”

Each of us has the absolute right, even now and despite anything Biden and Company say, to live our lives as we please, so long as we do no harm to others and violate their Inalienable God-given Rights in any manner. We have the right to enter into agreements freely and to reject agreements of our own free will. This coming together of our own free will in cooperation to see to our national defense and build a strong military as well as super-highways, a strong thriving economy, and an efficient postal service had more bearing on America’s rapid rise and success than anything forced on us against our will, which has historically always backfired on the government.

Traditionally and in America’s earliest years, the sovereignty of the individual and individual liberty was perfectly understood as not an entity that grants the individual license to do anything they wish to do. It had to be managed within an understanding of righteously formatted law as understood through the Christian and Western principles of the day, and it was most usually considered through everybody’s Inalienable God-given Rights, in regard to mutually advantageous with others and self-interest and the millions of small decisions each of us makes over our lifetimes that taken on the whole effect society.

It’s perfectly reasonable and acceptable to demand equality for everybody, when speaking of equal dignity as individuals and equal treatment under the law, however, each and every time anyone has ever attempted to apply equality to economics and results for individuals, such attempts have dragged economies and entire peoples into an economic malaise and quagmire, failing miserably and resulting in the death of freedom and liberty.

But today it would seem, the Biden regime would tell us what constitutes a family, when and how we can open our businesses, who we can employ, and when we may buy, sell or trade in our markets. They have done everything but seize the means of production to this point and their government intrusions are largely unwelcome to many freedom-minded Americans and they are debilitating and destructive to our society from a holistic perspective.

As noted by Henry David Thoreau in Civil Disobedience [1849]:

“There will never be a really free and enlightened State until the State comes to recognize the individual as a higher and independent power, from which all its own power and authority are derived, and treats him accordingly.”

And from a different angle, no truer words were ever spoken than the ones heard in Fountainhead, written by Ayn Rand, who saw the onset and advent of communism in Russia that first year of 1917 and all the horrors that followed:

“Power! What do you think is power? Whips? Guns? Money? You can’t turn men into slaves unless you break their spirit. Kill their capacity to think and act on their own. Tie them together, teach them to conform, to unite, to agree, to obey. That makes one neck ready for one leash. …. Why do you suppose I denounced greatness and praised mediocrities …? Great men can’t be ruled. Why did I preach self-sacrifice? If you kill a man’s sense of personal value, he’ll submit.”

Many Americans, much like myself, are willing to fight for our freedom and liberty, hopefully to see many new sunrises and ultimate freedom for all, but ever more willing to die in the figh, so our children may live free. But insanely, many more Amerikkans seem almost as willing to die in their fight to build a Super-State that takes all the nation’s wealth for redistribution to their communist and fascist ilk, seen in the ranks of Antifa, Black Lives Matter, Solidarity, Pueblo Sin Fronteras, LaRaza and Open Society, no matter that it comes at the cost of the loss of all liberty and total submission to an authoritarian socialist state.

America sees corporate heads, desperate to protect their niche of the market economy, willing to enforce illiberal, tyrannical diktats emanating from the Biden regime and even regular American citizens all too willing to act as informants and enforcers against liberty-minded Americans. This mindset is reminiscent of Nazi Germany which witnessed many of their own set upon, imprisoned, tortured and murdered by other German citizens — not all Nazi soldiers — who were “simply doing our jobs”. We are seeing the attempt to recruit and morph the bulk of our society…