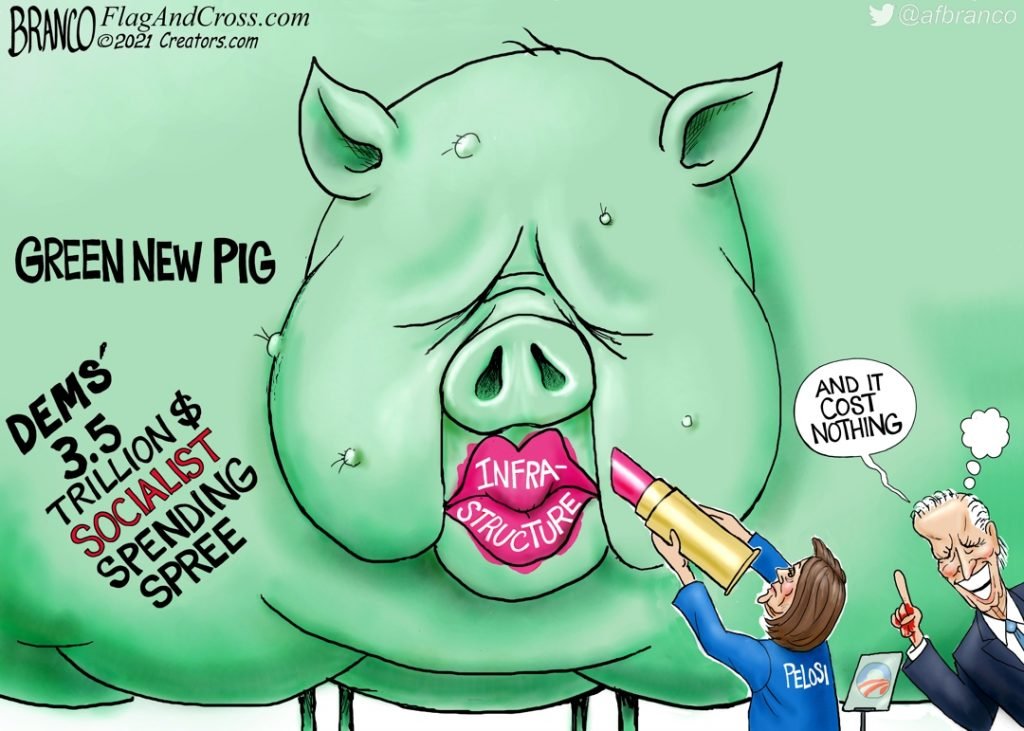 Democrats have inserted numerous provisions and subsidy programs into their $3.5 trillion budget that would benefit green energy companies and speed the transition to renewables.

The Build Back Better Act would invest an estimated $295 billion of taxpayer money into a variety of clean energy programs in what would amount to the most sweeping climate effort passed by Congress, according to a House Committee on Energy and Commerce report. That price tag doesn’t factor in the other costly measures approved by the House Ways and Means, Agriculture, Natural Resources, Oversight and Transportation committees last month.

“This bill is crammed with green welfare subsidies, specifically for corporations and the wealthy,” House Ways and Means Ranking Member Kevin Brady told the Daily Caller News Foundation in an interview.

“They are extending and creating a whole host of green energy tax credits such as electric transmission property, zero emissions facilities and clean hydrogen,” the Texas Republican continued. “These are no longer merely tax credits, which count against the taxes you owe. These are direct pay. In effect, they’re government checks from Washington.”

The credits Brady referenced would incentivize the development of new transmission lines delivering renewable energy nationwide, reward facilities that produce zero or net negative carbon emissions and offset major costs associated with producing clean hydrogen power. But these subsidies represent a small portion of the giveaways packed into the legislation.

Overall, the bill includes major aspects of the Green New Deal, the behemoth climate legislation first proposed by progressive lawmakers in 2019. The Green New Deal has an estimated price tag of nearly $93 trillion and would cost American families as much as $65,300 per year.

‘The whole thing is ridiculous’

Democrats’ budget would include a credit worth as much as $12,500 for consumers who purchase a new electric vehicle, $2,500 for electric motorcycles purchase and even $1,500 for electric bicycles, according to Myron Ebell, the director of the Center for Energy and Environment at the Competitive Enterprise Institute. Roughly $13.5 billion would be invested in building new electric vehicle infrastructure nationwide.

President Joe Biden recently set a goal for 50% of all vehicles purchased in 2030 to be electric. In addition, his administration said the U.S. would cut emissions 50% by 2030, have 100% carbon-free electricity by 2035 and achieve net-zero emissions by 2050.

“The whole thing is ridiculous,” Ebell told the DCNF. “It would be laughable except it’s not laughable because it’s going to have tremendously negative economic consequences. We can’t meet any of these targets, but in trying to do so we can do a huge amount of economic damage.”

The budget is a key cog in the president’s aggressive climate agenda and crusade against global warming which his administration has labeled a “crisis” multiple times since he took office. Days into his presidency, Biden nixed the Keystone XL pipeline permit, opened the door for sweeping regulation on fossil fuel producers and banned new oil and gas leasing on federal lands, but each executive action was met with a fierce response from states.

Since then, the president hasn’t just railed against fossil fuels, instead actively promoting renewable energy technology. His administration said Wednesday it would build seven wind farms nationwide that would have the capacity to provide enough energy to power 10 million homes by 2030.

“These technologies aren’t science fiction,” Biden remarked after a Sept. 14 tour of a National Renewable Energy Laboratory facility in Colorado. “They’re ready to be installed across the country right now.”

The Build Back Better Act would additionally implement a production tax credit for wind, solar and geothermal energy, according to Ebell. There is also an investment tax credit in the bill that would benefit developers of energy storage devices.

Perhaps chief among the climate policies found in the Build Back Better Act is the $150 billion Clean Electricity Performance Program (CEPP). The program, which is the centerpiece of the bill’s climate agenda, would incentivize energy companies to produce fewer emissions through a series of grants and fees.

“The CEPP is a repackaged version of a number of green energy proposals that have been made both recently and over the years to — we used to say nudge — now it’s much more of a heavy push towards utilities generating at least 85% clean energy,” American Institute for Economic Research senior faculty Ryan Yonk told the DCNF.

If an energy supplier increases their clean output by 4% compared to the previous year, it would be eligible for a sizable grant under the CEPP, according to the Energy and Commerce Committee. Companies that don’t increase clean energy by that amount will be punished with a large fine payable to the Department of Energy.

The program mandates that companies use grants to make energy more affordable for consumers. It also prohibits them from passing program costs to consumers, but fails to outline how it would ensure price increases aren’t tied to CEPP fines.

CEPP, though, continues to face opposition from Democratic West Virginia Sen. Joe Manchin, who could be the deciding vote for the budget, Politico reported. Manchin reportedly wants to gut much of the program and include a broader definition of “clean energy.”

However, when asked in September about whether he would sign a budget bill with fewer climate provisions, Biden said he was “for more climate measures.”

“It’s not based on science. It’s not based on an overall strategic plan. It’s a lot of feel good stuff,” Republican Utah Rep. John Curtis, a member of the House Energy and Commerce Committee and chair of the Conservative Climate Caucus, told the DCNF when asked about the budget. “What are we trying to accomplish? What’s the goal? Nobody’s articulated that.”

He noted, for example, that the U.S. falls far short of the grid capacity to handle the number of electric vehicle charging stations the budget would fund. The budget hasn’t received the support of a single elected Republican, not even Curtis, who has backed many climate policies.

The bill also fails to acknowledge the shortfalls of such a rapid transition to renewable energy, Yonk said. Many projects, such as wind and solar, are still not profitable decades after investment began pouring into renewables.

In 2020, just 12% of the energy consumed by Americans came from renewables, according to the Energy Information Administration (EIA). Solar and wind, which account for a large fraction of renewable energy produced, are nature-dependent and can be unreliable.

While producers often tout the energy capacity of solar and wind, they produce less than half of that capacity on average, EIA data showed. A rapid shift to renewables in Europe was a catalyst in the ongoing energy crisis that has seen oil, gas and coal prices skyrocket, The Wall Street Journal reported.

Renewables require large battery storage facilities to overcome some of the problems posed by their intermittent nature, but the U.S. has a total storage power capacity of almost 2 gigawatts, according to an EIA report in August. By comparison, the U.S. consumed about 3.8 million gigawatts per hour last year.

“We really don’t know what an energy market could look like because we subsidize and regulate all the different pieces of it,” Yonk told the DCNF. “We’ve taken what could be determined by individuals making their own choices and substituted it with a political solution where the values of those who lobby — whether they be on the green side or the energy production side — are what actually determines where we get things from.”

“As a result, we get things like the production tax credit or the investment tax credit that says, ‘okay, if you do these narrow list of things, we will provide a subsidy,’” he continued.