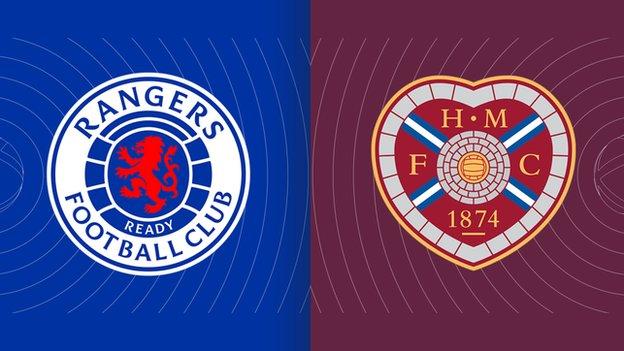 Rangers manager Steven Gerrard said his side “paid” for not being “ruthless enough” after Hearts snatched a dramatic late draw at Ibrox.

Craig Halkett’s 90th-minute header cancelled out John Lundstram’s strike, but the hosts passed up several opportunities to put the game to bed.

“I’m frustrated with the outcome because I feel we’ve done enough to win the game,” Gerrard told Rangers TV.

“First half, we were outstanding, but you need to get the second and third goal. Second half, I don’t think we came out with the same intent or urgency. We got a little soft as the game went on.

“The headlines will be about how he should’ve dealt with the cross, but I think we’ve stitched him up because we haven’t scored the second, third and fourth goals,” Gerrard added.

Substitute Kemar Roofe’s shot was touched on to a post by Hearts goalkeeper Craig Gordon at 1-0 and Alfredo Morelos missed an excellent chance for the hosts shortly before Halkett headed home.

Gordon had to deal with shots from Scott Wright, Ianis Hagi and Joe Aribo before denying Leon Balogun twice in quick succession at a corner, with Michael Smith also required to complete the clearance.

Morelos, chasing his 100th Rangers goal, was off target from inside the box in another of the home side’s chances.

Rangers found the lead when Lundstram collected a Halkett clearance and curved the ball beyond Gordon from around 25 yards.

And winger Barrie McKay was denied a goal against his former club by McGregor, who then held a Cameron Devlin effort.

The home side went back on the offensive and Roofe’s shot was forced on to the right-hand post by Gordon, who then punched away a dangerous Goldson header.

Roofe squared for Morelos to turn wide with the goal gaping and Hearts substitute Armand Gnanduillet almost capitalised with a low shot blocked by McGregor.

The warnings had been there for Rangers and Halkett made it all square.

Hearts manager Neilson was sent to the stand for two bookings shortly before the equaliser amid a fracas among the players near the technical area.

Hearts manager Robbie Neilson told Hearts TV: “I was delighted with them today. I wanted to come here and win, but worst case scenario, you take a point.

Rangers return to the Europa League on Thursday with a home match against Danish side Brondby (20:00 BST), then face St Mirren in the Premiership next on Sunday, 24 October (12:00). Hearts host Dundee in the top flight next Saturday (15:00).

Player of the match

Laughs have run out for these vile Cuomo bros: Devine Russian...

WeThePeople - December 5, 2021 0
The karma train comes for us all in the end, and it has mowed down the Cuomo brothers with a delicious savagery. As the...
video

Tucker: Clarity is the only way to improve things