2021 is becoming known as the year of chip shortage, with many industries being badly disrupted globally. In fact, the chip shortage of 2021 is now expected to drag on till 2022 at the earliest, and may take even longer before a full recovery is in sight.

But despite the global shortage of semiconductors, Gartner is reporting an increase in worldwide PC shipments, with 84.1 million units shipped in the third quarter of 2021, an increase of 1% from the third quarter of 2020. According to Mikako Kitagawa, research director at Gartner, despite a lesser need for PCs and Chromebooks as students made their way back to school, business PC demand was still robust.

“Business PC demand remained strong, led by economic recovery in key regions and the return of some workers to offices,” elaborated Kitagawa. “However, business PC growth was concentrated in the desktop segment as semiconductor shortages continued to constrain laptop shipments. These component shortages are expected to persist into the first half of 2022.”

The top three vendors in the worldwide PC market remained unchanged year-over-year, with Lenovo maintaining the top spot in shipments. 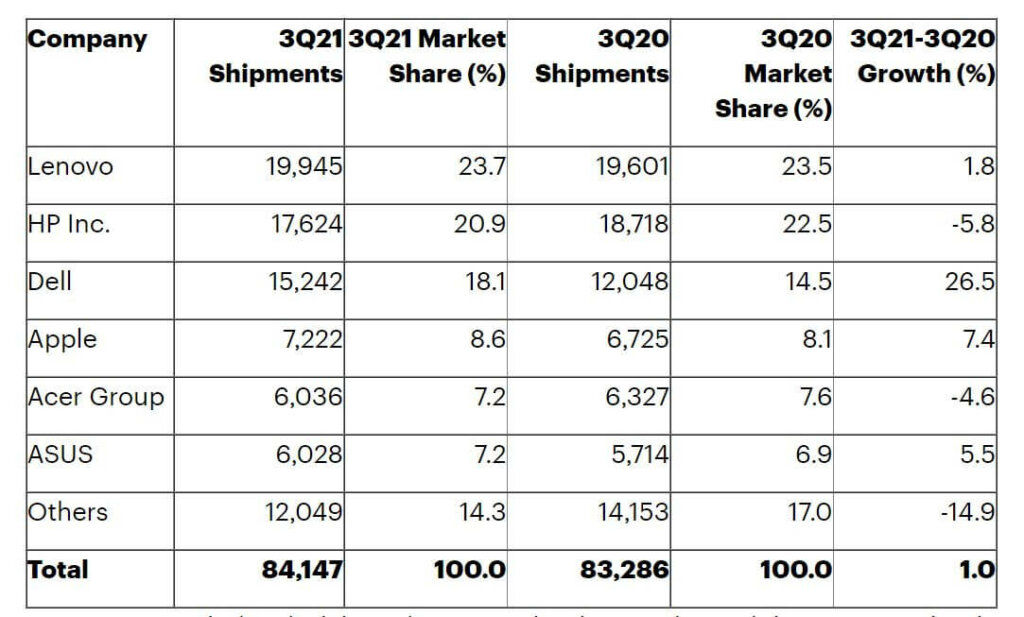 Despite Lenovo’s growth, their shipments were adversely affected by the slowdown in the consumer market and supply shortages across the enterprise segment. HP experienced its second consecutive quarter of year-over-year decline, driven by a 30% decrease in shipments in the US due to the weakening Chromebook demand in the education sector, as well as continued supply chain interruptions throughout this quarter.

Apple somehow still managed to achieve 7.4% growth despite a weak consumer market. The company’s M1-based PCs have been well received by the user community, driving increased shipments. But with a product refresh announced recently, some Apple buyers have put laptop purchases on hold — but have also been warned to prepare for delays due to the global semiconductor chip shortage in 2021.

Interestingly, IDC’s Worldwide Quarterly Personal Computing Device Tracker has predicted that worldwide shipments of PCs are expected to grow 14.2% to 347 million units in 2021. This is down from IDC’s May forecast of 18% growth with continued supply chain and logistical challenges cited as the main reasons. The Tablet market is also expected to grow in 2021, but at a much slower pace of 3.4%.

“We continue to believe the PC and tablet markets are supply-constrained and that demand is still there. The lengthening of the supply shortages combined with ongoing logistical issues is presenting the industry with some big challenges. However, we believe the vast majority of PC demand is non-perishable, especially from the business and education sectors,” said Ryan Reith, program vice president with IDC’s Worldwide Mobile Device Trackers.

IDC also believes the fourth quarter of 2021 will see some changes especially with the global rollout of Microsoft Windows 11, the first major operating system upgrade from Microsoft since 2015. The Windows 11 rollout is expected to have a limited immediate impact on the business market, as enterprise-class PCs will likely continue to be available with Windows 10 through to 2023.

At the end of the day, there is no denying that the global semiconductor chip shortage in 2021 has had an impact on PC sales. But the PC market itself is proving be hardy and resilient, with demand still growing at a rate whereby supply is sufficient, for now at least.

Germany plans to make COVID-19 vaccination compulsory for some jobs

Getting Najib Off the Hook

Retail trends that sellers should consider heading into 2022