It started off with Rio Ferdinand saying “let’s go” and ended with him in hospital.

It’s a day every Manchester United fan will want to forget.

So here is how social media reacted to their 5-0 home walloping by Liverpool.

The day began with so much promise…

Five minutes in and Naby Keita gave Liverpool the lead. Olympic legend, former Central Coast Mariners trialist and United fan Usain Bolt said it was a “joke”. If only he knew what was to follow.

Mohamed Salah scored twice to make it 4-0 at the break and some were even wondering if Ole Gunnar Solskjaer would still be the manager in 15 minutes’ time.

United brought on Paul Pogba at half-time. Some weren’t sure he was the man to “put a tackle in”. More on that in a minute.

It could be worse though, Salah could score a hat-tri… oh.

Still, at least Ferdinand was at home to enjoy it in his comfortable warm hous… oh. 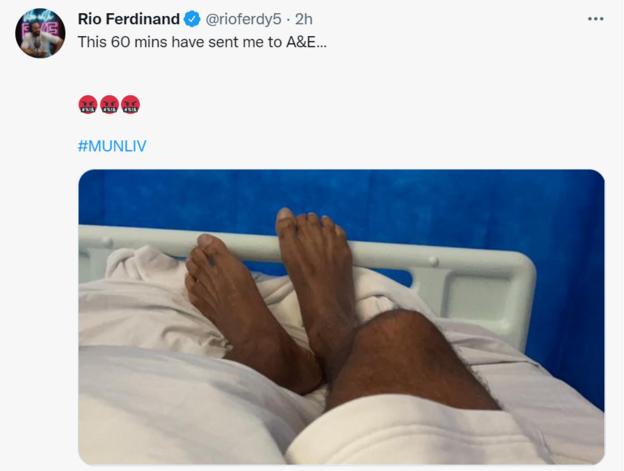 At least the fans were staying behind to support their tea… oh.

At least Sir Alex Ferguson was having a good ti… oh.

It turns out Pogba could put a tackle in, but not a good one. He was sent off after 15 minutes for a bad challenge on Keita, who was taken off on a stretcher.

Cristiano Ronaldo escaped a possible red card in the first half and had a goal disallowed by VAR in the joint-worst defeat of his career. Apt that it came on El Clasico day.

South Africa’s 400m Olympic and world champion – and Liverpool fan – Wayde van Niekerk was enjoying it – and even tagged Bolt in.

At least Bolt can wake up now.

And so onto the fall-out…

Trent Alexander-Arnold thinks Salah is the best player in the world – and his fellow Reds lapped it up.

United should have expected the worst. It is October after all.

Paul Ince played for both teams so who knows?

Boris Becker might not know his way around an apostrophe – but he has an idea for who could replace Solskjaer.

Capmocracy - December 7, 2021 0
The Africa Cup of Nations begins next month, with about 40 Premier League players set to miss several weeks of the season as...
College Football

WeThePeople - December 7, 2021 0
Two liberal immigration groups will merge in order to better prepare for a GOP-led Congress in 2022, Axios reported. The two groups,...