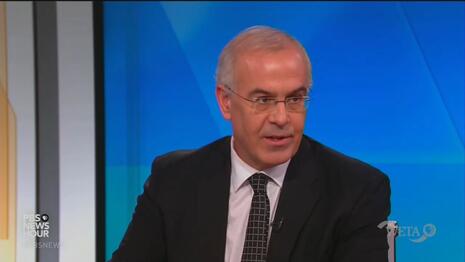 The PBS NewsHour will spotlight New York Times columns by their panelist David Brooks when they love them — like his promotional interview with President Biden, or his liberal-pleasing column “The G.O.P. Is Getting Even Worse: Trumpians are having a venomous panic attack.”

This did not happen this week, when Brooks wrote a critical column titled “The Self-Isolation of the American Left.” It’s too conservative!

For two weeks now, the Friday panelists on PBS have discussed schools and Critical Race Theory, with the liberals lying and denying CRT is taught anywhere in America. Brooks reports that the Left is sinking into a disturbing bubble:

A training for Loudoun County, Va., public school administrators taught that “fostering independence and individual achievement” is a hallmark of “white individualism.”

A Williams College professor told The Times last week, “This idea of intellectual debate and rigor as the pinnacle of intellectualism comes from a world in which white men dominated.”

Brooks warns that an ideological superstructure is taking over discussions of race. None of this analysis has come out of his mouth on PBS, and PBS isn’t bringing it up:

History is mainly the story of power struggles between oppressor and oppressed groups; the history of Western civilization involves a uniquely brutal pattern of oppression; language is frequently a weapon in this oppression and must sometimes be regulated to ensure safety; actions and statements that do not explicitly challenge systems of oppression are racist; the way to address racism is to heighten white people’s awareness of their own toxic whiteness, so they can purge it.

Today a lot of parents have trouble knowing what’s going on in their kids’ classrooms. Is it a balanced telling of history or the gospel according to Robin DiAngelo?

When they challenge what they sense is happening, they meet a few common responses. They are told, as by Virginia’s Democratic…