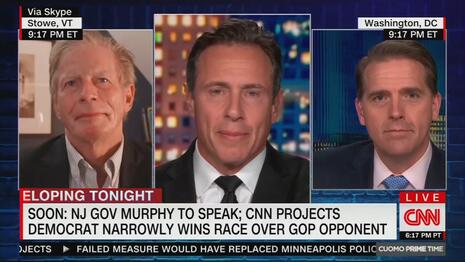 Sparks flashed on Cuomo Prime Time as Republican Scott Jennings, former special assistant to President George W. Bush, confronted Chris “Fredo” Cuomo and the Lincoln Project’s Stuart Stevens on the heinous lies that were spewed against Virginia’s governor-elect, Glenn Youngkin (R). Jennings called out the falsehoods and had Cuomo on his heels as he yelled at the CNN host about the hypocrisy in what they demanded from Youngkin.

After his opening monologue where he attacked Virginia parents as being too stupid to understand what Critical Race Theory was, Fredo wanted to know what lessons Jennings thought Republicans learned from their victory.

“I think the lesson for Republicans is – and call me old fashion –but it’s platforms work,” he explained. “Quite literally, the Republicans didn’t write a platform in 2020. And this time around in Virginia, Glen Youngkin wrote a platform.”

From there, he called out the sleazy campaign of Democrat Terry McAuliffe and the disgusting antics of the Lincoln Project for the lies they propagated. Jennings explained that it was a masterful strategy by Youngkin to ignore the attacks, forces on the issues, and not let them drag him down into the mud:

And he ran it on it, and he never took the bait of the fundamentally unserious campaign run by the Democrats, which was solely focused on one thing: lie about Glenn Youngkin, trying to turn him into Donald Trump. Stuart was part of it.

It did not work because it wasn’t true. And had Youngkin taken that bait, he would have been drug down into that mire and I think he would have lost. But he stuck to a platform, he won on an issues-based campaign.

“So, the lesson for Republicans: listen to the voters, write a platform, run on issues. And I think the lesson for Democrats is, if you thought you were going to run these midterms all on Trump, you’re sorely mistaken,” he added.

Capmocracy - December 7, 2021 0
The Africa Cup of Nations begins next month, with about 40 Premier League players set to miss several weeks of the season as...
College Football