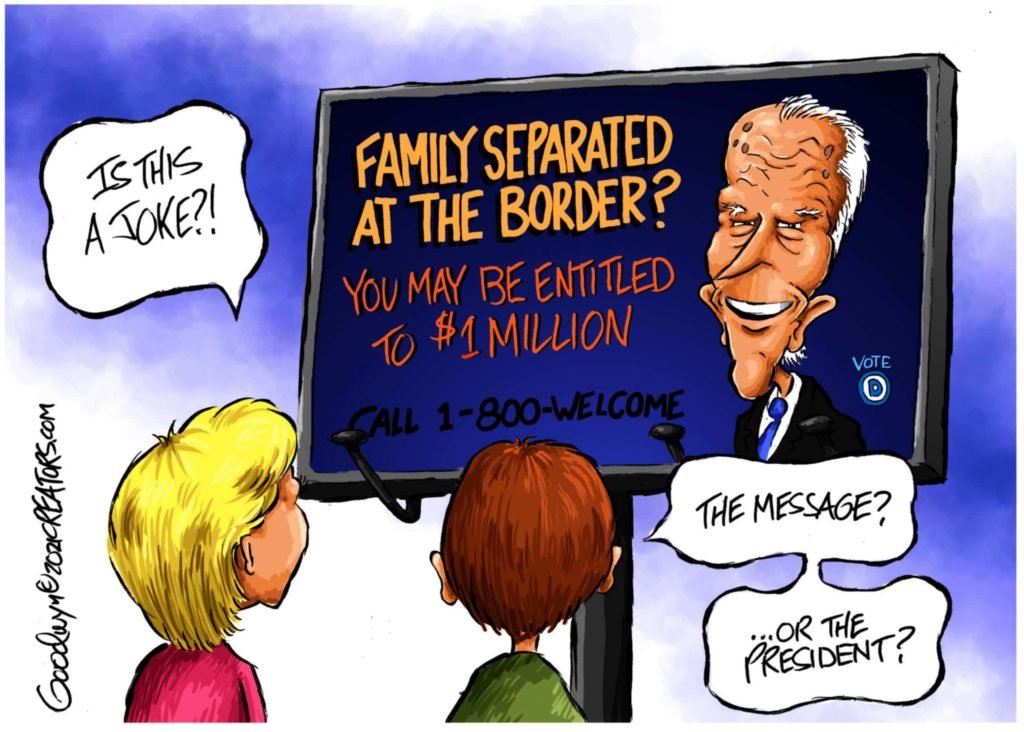 Just when the idiot presidency of weepy, sleepy Joey Biden appeared to reach a failing apex, these anti-American fools decided to give nearly $1,000,000 per family to people who broke American law and invaded our borders. And the fact that the Biden’s leftist Department of Justice came up with this stupidity, and one can be sure that a large percentage of this windfall will go to the aliens’ lawyers, with a large percentage of that legal fee finding its way into the DNC coffers, proves the Democrats’ total corruption.
It’s a certainty that there are other illegals waiting in the wings for their turn at claiming racist mistreatment at the hands of Uncle Sam, and Democrat lawyers will push each case with vigor to enrich people who broke our laws, while tax-paying Americans to foot that enrichment bill and see prosperity evaporating with Joey’s inflationary multi-trillion dollar spending spree.

Of special interest on the subject of the cash-for-invaders decision, is that the obscene give-away has been discussed for over a week, but only two days ago, when Biden was asked about its validity, he said that it was garbage and that such a thing would never happen. But now the administration lackeys are telling us that our vacant-headed president is on board with the hand-out. So it appears that the Biden administration is a dictatorship run by persons other than the elected president, so who the hell is really running things in the Biden swamp?

And while all of this is taking place, perhaps thousands of Americans are left to suffer in Afghanistan following Biden’s disastrous exit from that unfortunate nation. Maybe the money going to law-breaking aliens should be reserved for the unfortunate Americans held hostage in Afghanistan, if they ever return home alive. But weepy Joey never says a word about the Americans in danger in Afghanistan, seems to be completely uninterested in the welfare of the American hostages suffering there and is not trying at all to get them released from the threat of their terrorist captors.

Our beloved Joey’s mind is so far gone that I believe he actually has no idea of the terrible decisions made at all levels of his administration and the Democrat party, and by the far-left press that supports and covers up for the Democrats. But the horrendous decision to fire police, military, nurses and doctors who have not been vaccinated, may be the worst decision of all.

The Biden administration has gone completely ape-s**t with power, with no end in sight to their insanity as they march forward to Fundamentally Transform America. Biden’s entire Build Back Badder scheme must be blocked, now! Call your legislators and tell them to stop this fool man and his dictatorial urges.

Support Conservative Daily News with a small donation via Paypal or credit card that will go towards supporting the news and commentary you’ve come to appreciate.

47,000 More People Died of This Disease in 2020 Due to Lockdowns, World Health Organization Reports

Finding Utility in the Dark Economy—and Mitigating Its Dark Side