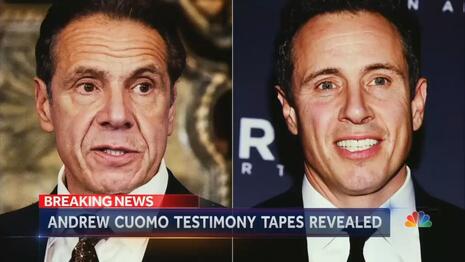 There were two different yet related forms of bias by omission during the broadcast evening newscasts Monday night. While CBS Evening News ignored the New York attorney general’s office releasing thousands of pages of documents and hours of video testimony from the investigation into former New York Governor Andrew Cuomo (D), ABC’s World News Tonight ignored how that evidence exposed the role of their former reporter, CNN’s Chris “Fredo” Cuomo played in coordinating the response from his brother’s PR team.

Instead of reporting on the newly released evidence against Andrew, CBS anchor Norah O’Donnell spent over two minutes (2:12) hyping Cyber Monday deals. She also gushed about the Christmas decorations at the White House (19 seconds). She also ignored the start of the trial against actor Jussie Smollett for his hate crime hoax.

Meanwhile, over on ABC, correspondent Trevor Ault was playing soundbites from Andrew’s testimony to investigators:

INVESTIGATOR: Have you ever had any inappropriate relationships with women on your staff?

ANDREW CUOMO: Inappropriate, I assume, means a sexual relationship with women on my staff? The answer is no.

“Today, the New York attorney general releasing nearly nine hours of video testimony over 11 hours of questioning, recorded in July as part of their investigation, which found Cuomo sexually harassed 11 women, leading to his resignation,” he reported.

Adding: “The attorney general’s report said they found Cuomo’s ‘Denials to lack credibility and to be inconsistent with the weight of the evidence obtained during our investigation.’”

Over on NBC, chief environmental affairs correspondent Anne Thompson selected even grosser soundbites from Andrew’s interview with investigators to share with viewers:

INVESTIGATOR: You understand what a girlfriend is?

But the part where Thompson’s report differed from…