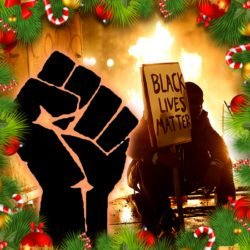 In its attack on Thanksgiving – a day reserved for giving thanks for the things we have and not the other way around, the self-described “collective of liberators” tweeted, “YOU ARE ON STOLEN LAND”, with the subheading “Colonization never ended, it just became normalized”

The day after Thanksgiving, BLM put up its virtual Christmas “decoration,” a Black “Xmas” profile picture.

Expounding on their aggressive Marxist-based messaging, BLM tweeted: “For 7 years Black Lives Matter has been drawing connections between white-supremacist-capitalism and police violence with our Black Xmas campaign.”

In an article link included in the tweet, Dr. Melina Abdullah, a professor of pan-African studies at California State and a self-proclaimed “womanist scholar-activist,” Abdullah railed against the Rittenhouse verdict explaining, “Now is when we must renew our commitment to struggle – not simply against white-supremacist-capitalism, but towards imagining and building new visions for the world and for Black people.”

Last week, BLM activist Vaun Mayes of Wisconsin was excoriated on social media for saying that the Waukesha Christmas parade attack “sounds like the revolution has started.”

Why This Is Important

Here is the perfect example of just exactly how hate-filled and steeped in Marxism – at its core – the Black Lives Matter movement truly is. In fact, there is nothing about this movement that isn’t centered on Marxism division and hate.

The core ideology of the BLM movement is a plagiarized version of the Marxist-based Critical Theory dogma; a socioeconomic political theory meant to use division to conquer the masses bringing them to heal. The dogma, in its original form, used the economic classes to create the dividing fault line.

Today, the Fascists who are seeking to bring the masses to heal have replaced the economic faultline with a faultline based on racial division, and the useful idiots of the opportunistic race-baiting movement have gone all-in.

In our free society, we must suffer such attacks on our culture because even the disingenuous and the opportunistic are guaranteed the freedom of speech. What we don’t have to afford these opportunistic reprobates, however, is a validation of their destructive, self-centered, false narrative dogma.

The statistics disproving a systemic racial bias in law enforcement are well documented. So too are the statistics disproving any systemic racism in education clear and present for those who don’t openly refuse to see them. In fact, the pendulum of racism has swung so far to the opposite end that it is the opportunistic activists of the Black Lives Matter community that are executing open and hateful racism.

These attacks on two of the pinnacle holidays in the United States serve as proof of this hate and opportunism.

In fact, the Thanksgiving holiday was made into a federal holiday by President Lincoln to reflect on the lives lost during the US Civil War, the war that freed the slaves. He issued a proclamation beseeching every American to ask God to “commend to his tender care all those who have become widows, orphans, mourners or sufferers in the lamentable civil strife” and to “heal the wounds of the nation.”

So, BLM is effectively defecating on those who fought and died – and those who sacrificed during a time when you couldn’t just loot a 7-11 to eat – to fee them.

Additionally, BLM’s politically opportune attack of Christmas, leveling a double-barrelled shoot of both racism and anti-free market Marxism, completely ignores that it is a season, a holiday, centered on the biblical tenet universally recognized by every religion of “peace on Earth, goodwill toward men.”

If there was ever a reason to denounce the Black Lives Matter movement – aside from the fact it is based on a lie – it should be this; their examples of full-throated hate and the targeting of holidays meant to bring people together.

BLM is not about “peace on Earth, goodwill toward men.” It is about division, hate, and the advancement of Marxism, a political ideology that will – blind to it as they may be – re-enslave the Black community and every other racial demographic outside of the elite.

Greg Gutfeld: It’s a great time to be alive if you’re criminally deranged