HEADLINE INFLATION likely eased in November amid a slower rise in food prices and a drop in pump prices, analysts said.

A BusinessWorld poll of 18 analysts yielded a median estimate of 4% for the November inflation, which is near the upper end of the 3.3% to 4.1% estimate given by the Bangko Sentral ng Pilipinas (BSP).

If realized, last month’s consumer price index (CPI) will be within the 2-4% target range by the BSP and slower than the 4.6% in October but quicker than the 3.7% logged a year earlier. 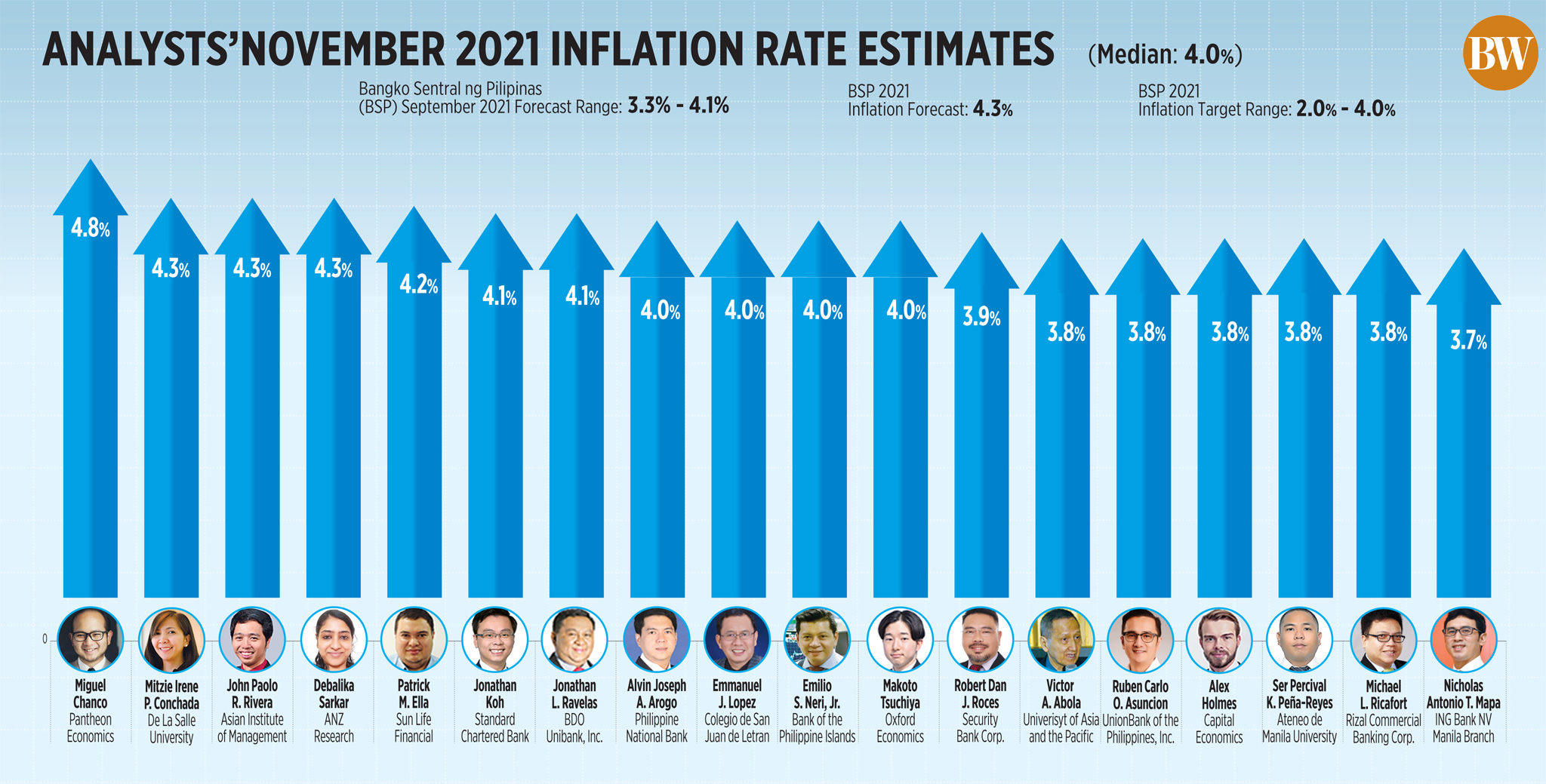 The Philippine Statistics Authority will release the November inflation report on Tuesday (Dec. 7).

The reduction in global oil prices likely helped soften the rise in the CPI in November, analysts said.

“Prices could slow down due to the decline in oil prices but prices of other basic commodities remain high. Hopefully, the opening up of the global economy will increase supply,” Mitzie Irene P. Conchada, an economist from the De La Salle University, said.

Dubai crude prices fell by $4.9 per barrel in November, based on data from the Department of Energy. There are concerns the fresh spike in coronavirus disease 2019 (COVID-19) cases, as well as the emergence of new variants such as Omicron, could hurt global economic recovery.

“The impact of the emergence of the Omicron variant on inflation is highly uncertain. In the short term we may see global oil and commodity prices soften in anticipation of lower global demand,” said Makoto Tsuchiya, an economist from Oxford economics.

The CPI rose by 4.5% in the first 10 months of 2021. Inflation was beyond the BSP’s target so far this year, except July, as low meat supply caused prices to spike.

Analysts expect the BSP will maintain an accommodative policy to support economic recovery.

“The discussion abroad of whether inflation is transitory or not looks less relevant for us, since I’m seeing a continued easing of inflation rates until the first quarter of 2022, and only slight upward movements thereafter but staying within BSP target,” Victor A. Abola, an economist from the University of Asia and the Pacific, said.

US Federal Reserve officials in recent weeks have become more hawkish, with Fed Chairman Jerome H. Powell saying it was time to stop talking about “transitory” inflation. He added that officials should discuss a quicker winding down of the bond-purchase program.

The BSP will likely instead focus on gross domestic product (GDP) growth rather than the November inflation outturn, said Alvin Joseph A. Arogo, vice-president and head of equity research division at Philippine National Bank.

“The BSP will be comfortable to start the hike cycle when the economy is nearer its fourth-quarter 2019 level, which we estimate will occur in the fourth quarter of 2022,” Mr. Arogo said.

The Philippine GDP expanded by 7.1% year on year in the third quarter, bringing year-to-date growth to 4.9%. The government set a 4-5% GDP growth target this year, a turnaround from the record 9.6% contraction in 2020.

BSP Governor Benjamin E. Diokno has said there is a need to keep an accommodative policy to support economic growth that is gaining traction.

In its Nov. 18 policy review, the Monetary Board kept interest rates at record low, even as it cautioned on upside risks to inflation next year.

The central bank’s last policy review meeting for the year is on Dec. 16. Mr. Diokno has earlier said he does not see the need for rate adjustments until the end of 2021. — Luz Wendy T. Noble

UnionBank Wants to Manage your Cryptocurrencies

Samsung S-series May Finally Get Its Own S-Pen